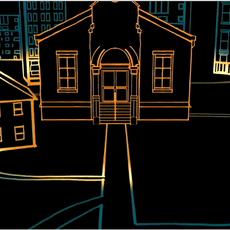 Magazine/News ▶ Film
yU+co. Re-teams With Director Davis Guggenheim On ''Waiting For Superman''
rightwordmedia, added 2010-10-19 16:59:57 UTC 10,614 views  Rating: (0 ratings)
HOLLYWOOD, CA -- Throughout the course of ''Waiting for Superman,'' the new documentary directed by Davis Guggenheim (''An Inconvenient Truth''), viewers are taken on emotional rollercoaster courtesy of the heart-wrenching case histories of five different families across the country struggling to give their kids a shot at a better education. When it came to the main-on-end title sequence though, Guggenheim entrusted yU+co., the design/visual effects studio led by Founder/Creative Director Garson Yu, to leave the audience with just one lasting impression: hope.

''Garson and I knew we needed more in the end titles than inspirational words -- we were searching for a metaphor that moved the audience at the end to action,'' Guggenheim says. ''Somehow we landed on the idea that a great school is a beating heart -- and when it works -- it pumps life into a neighborhood. Garson and his team took this idea and ran with it. It's everyone's favorite moment -- a school giving life to the world around it, capturing the hope of the filmmakers and inspiring the audience.''

Following on the heels of their successful collaboration on the Academy Award-winning ''An Inconvenient Truth'' (2006), the ''Waiting For Superman'' titles feature a gracefully moving string of connective typography underscored by a series of animated blue lines.

Set to the powerful track ''Shine'' by John Legend, key title credits are interwoven with an impassioned cry for help: ''Our system is broken and it feels impossible to fix, but we can’t wait. Text ‘possible’ to 77177,'' the typography reads. As the titles progress so do the complexity of the animated blue lines.

The sequence builds toward a breathtaking and unexpected payoff with the final on-screen type: ''Great schools won’t come from winning the lottery. They won’t come from Superman. They will come from you.'' The last word ‘you’ fades slowly into the background as the camera swiftly pans backward and quickly skyward. A golden shaft of light reveals that the blue lines seen throughout have formed a large, 3D animated blueprint of a school and a community connected to it.

''The idea was to let the audience take all of this information and transfix them with this peaceful, elegant moving type of connecting words set to this inspiring song,'' Yu says. ''We also incorporated subtle uses of light -- particularly cool blue and warm gold -- to further symbolize the idea of positive change.''

The ultimate compliment comes from the film’s Producer Lesley Chilcott, who views the title sequence as literally the end of the film, not something separate. ''It's part of the film,'' Chilcott says. ''We've screened the film all over the country, and people stay and watch yU+co'.s beautiful 3D animation. The titles are simply breathtaking.''

Chilcott continues, ''We intercut our production credits with little poems about how and why you can get involved. If the film has done it's job, the audience is very emotional at the end, and the poems we wrote, along with the beautiful design gives people choices on how to get more involved.''

For Yu the project was a personal one. ''I have a son who is a senior in public high school and the problems the film highlights are very real, but they are within our power to fix as a nation,'' Yu says. ''Our goal was to communicate an overall hopeful feeling and deliver a call to action for all of us to do something to change the status quo.''

In addition to their work on ''Waiting for Superman,'' yU+co. also completed work on the titles for the Warner Bros. romantic comedy ''Life As We Know It'' and for the second year in a row created the full graphics package for NBC’s recent broadcast of the 62nd Annual Emmy Awards. In addition, they created the open for the live event launch conference of LG’s Optimus smartphones.

Click here for more info about Waiting for Superman:
http://www.waitingforsuperman.com/