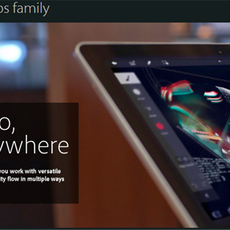 During an Oct. 3 keynote announcing the news, Adobe’ CTO Kevin Lynch, said the new Adobe Touch Apps were inspired by Adobe Creative Suite software, and they bring professional-level creativity to millions of tablet users. The apps address multiple areas of the creative process: image editing; ideation; sketching; mood boards; website and mobile app prototyping; and presenting finished work. They are headlined by Adobe Photoshop Touch, an app Adobe officials referred to as groundbreaking as it brings the unique creative and image-editing power of Photoshop to tablet devices for the first time.

The new Adobe Touch Apps will be available soon as standalone apps. Yet, the Adobe Touch Apps are essential components of Adobe Creative Cloud, which is expected to become a worldwide hub for creativity, where millions can access desktop and tablet applications, find essential creative services, and share their work. Files created via Adobe Touch Apps can be shared, viewed across devices or transferred into Adobe Creative Suite software for further refinement – key features of Adobe’s vision for the Creative Cloud. With stylus capabilities expected to become a key feature on some next generation tablets, Adobe Touch Apps are designed to work with both finger and stylus input, Lynch said.

“Adobe Touch Apps deliver high-impact creative expression to anyone who has a tablet,” Lynch said in a statement. “With Adobe imaging magic coming to tablet devices, new apps like Photoshop Touch will open your mind about the potential of the touch interface for creativity and demonstrate that tablets are an essential part of anyone’s creative arsenal.”

Meanwhile, anticipating the way people are integrating tablets into their everyday lives, the new family of Adobe Touch Apps empowers users to create on tablet devices freeing them from the desktop or laptop computer. In a Q&A session with press and analysts, Lynch said, “In times of change like this, you have to be a little predictive about how you think things are going.”

David Wadhwani, senior vice president and general manager of Adobe’s Digital Media Business Unit, said an Adobe survey showed that 60 percent of the company’s user base said they already have or plan to buy a tablet computer in the next year. And 90 percent of those people said they would like to be able to do creative development on their tablets. He said.

The new Adobe Touch Apps include:

·         Adobe Photoshop Touch lets users transform images with core Photoshop features in an app custom-built for tablets. With simple finger gestures, users can combine multiple photos into layered images, make popular edits and apply professional effects. The tablet-exclusive Scribble Selection Tool allows users to easily extract objects in an image by simply scribbling on what to keep and then what to remove. With Refine Edge technology from Adobe Photoshop, even hard-to-select areas with soft edges, such as hair, are easily captured when making selections. Additionally, the app helps users quickly find images, share creations, and view comments through integration with Facebook and Google Search. Using the syncing capabilities that are a component of Adobe Creative Cloud, files can be opened in Adobe Photoshop.

·         Adobe Debut allows users to present designs to clients and stakeholders virtually anywhere. Adobe Debut quickly opens tablet-compatible versions of Creative Suite files for convenient and beautiful viewing on the tablet, including Photoshop layers and Illustrator art boards. Feedback is gathered using a markup pen tool to add notes and drawings on top of the work.

·         Adobe Ideas is an easy-to-master, vector-based tool for drawing. By using a stylus or finger, strokes appear smooth at any zoom level. Starting with a blank canvas, users can choose color themes, and pull in tablet-compatible image files that can be controlled as separate layers. Finished results are easily accessed in Adobe Illustrator or Photoshop.

·         Adobe Kuler makes it easy to generate color themes that can inspire any design project. Color can be explored and discovered, with hundreds of thousands of Kuler themes already available via the creative community. Social engagement in the community is enhanced by rating and commenting on themes, which can be exported as color swatches for Adobe Creative Suite projects.

·         Adobe Proto enables the development of interactive wireframes and prototypes for websites and mobile apps on a tablet. Ideas are communicated and shared with teams and clients using a touch-based interface. Gestures quickly express a design concept, explain website structure or demonstrate interactivity. The wireframe or prototype then can be exported as industry standard HTML, CSS and JavaScript, and shared in popular browsers for immediate review and approval.

Adobe Touch Apps build on the launch of Adobe Carousel, a photography solution that gives access to a user’s entire photo library across their tablets, smartphones and desktops — with no storage issues, no manual syncing hassles. And users can enjoy all their photos anywhere they are, and make them look professional using the same powerful photo-processing technology as Adobe Photoshop Lightroom software, Adobe officials said.

Adobe Touch Apps will be available for Android devices in November 2011. Adobe expects to make an announcement regarding iOS availability in early 2012. Adobe Ideas is already available for the iPad. Introductory pricing is $9.99 for each app. Access to the file viewing, sharing and transfer functionality of Adobe Creative Cloud is included in the price of each Adobe Touch App. Details regarding pricing of the Adobe Creative Cloud and its expanded capabilities around applications, services and community will be announced in November 2011, Adobe officials said.