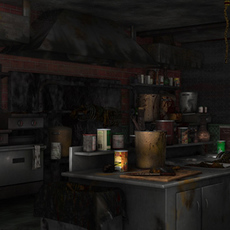 Given the western-themed look most commonly associated with Stephen King’s epic “The Dark Tower” series, 3D artist and interactive producer Brian Stark knew he was taking a chance when he suggested “blowing the dust off the brand and making it more reflective of the post-apocalyptic world” King’s characters inhabit. But Stark, a longtime fan of the author’s work and founder of New Jersey-based Metro DMA, was confident that this was the right way to go. He should know. In 2004 Stark worked with King on the creation of two new Web sites: the author’s official site (http://www.stephenking.com) and The Dark Tower Official Web Site (http://www.stephenking.com/darktower/). So he was the logical choice to work on the redesign of both, which began in 2007. Stark has been working on stephenking.com ever since.

In addition to updating the look and database capabilities of both sites Stark, and business partner Judy Hahn were primarily charged with the creation and launch of Discordia, an online game based on The Dark Tower series. Stark relied almost entirely on MAXON’s CINEMA 4D, which he purchased for the yearlong project, to design and build the artwork and videos for the Flash game. “I tried a lot of different 3D applications over the years but it was clear C4D was the answer for me because it was so user-friendly,” Stark recalls.

Making the Dixie Pig restaurant look realistic was one of the biggest challenges 3D artist Brian Stark faced when working on Discordia.

While Discordia pays homage to the existing storyline of King’s seven Dark Tower novels, it also introduces new characters and takes off in some completely unexpected directions, Stark says. For those who are unfamiliar with the series, “The Dark Tower” stories center around the adventures of Roland Deschain, a gunslinger searching for a Dark Tower described as being both “physical and metaphorical.” The novels cross multiple genres with influences from everything from fantasy and horror to science fiction and westerns.

Stark used CINEMA 4D’s Hair module to create the life-like (though very large) flea sitting on the kitchen counter next to a can of chili peppers.

Fans of “The Dark Tower” will recognize Discordia’s basic plot, which revolves around the long-standing conflict between the evil Sombra Corporation (a subsidiary of the equally villainous North Central Positronics firm) and the good Tet Corporation. Stark based his concepts for the design of the game, as well as the revamping of the Web sites, on art that reflected the retro-modern look associated with North Central Positronics. His ideas were an immediate hit with Marsha DeFilippo, King’s personal assistant, who pitched them to the author. Shortly thereafter, Stark and Hahn got to work on the project, which Stark describes as so consuming “I hardly left my house for eight months.”

After a quick call to MAXON’s tech support, Stark was able to make realistic-looking cobwebs for the Dixie Pig’s pantry.

Discordia, which is set in present-day New York City, begins with Tet Corporation agents investigating a brutal murder scene at the Dixie Pig restaurant, a rib joint in New York City, one of several worlds in “The Dark Tower” series. Of all the challenges Stark faced while building the 3D environment used in Discordia, creating the Dixie Pig was the biggest. With its red brick walls, red leather chairs, red tablecloths and curtains, and dark, heavy woodwork, the rib joint was already a fairly foreboding place—and then Stark added the blood splatters. “It’s supposed to be 10 years after vampires and other mutants were killed while dining there, so everything needed to look real and kind of lost in time,” he explains.

It looks like a plate, but it’s really a riza. Thrown like a Frisbee, a riza is capable of decapitating its victim. Stark used an alpha map to place the blood precisely where he wanted it on the object’s surface.

Thanks to the search functionality of the Kindle version of the book, as well as Robin Furth’s “The Dark Tower: The Complete Concordance,” Stark was able to recreate this and other scenes right down to the last detail using CINEMA 4D. He bought a dining chair, a couch and some light fixtures online and then modeled the rest of the 3D scene from scratch. Using the Cloth functionality in MAXON’s MOCCA 3 module he created simulations that gave every piece of fabric, including napkins and a strip of police tape left on the floor, a natural, draped look. “We also worked hard on the lighting to create both hard and soft shadows that added to the mood of the scene,” he says.

This screenshot of the Dix Pig’s dining room, which includes 13,000 objects, makes clear the high level of detail in the model right down to the glassware behind the bar.

Because he didn’t want cloned objects in the room to compromise the realistic atmosphere, Stark modeled almost everything individually rather than using a cloning tool. Managing all of those objects and rendering them was an enormous undertaking that Stark wasn’t always sure he was going to be able to pull off. “We had our fingers crossed at some moments when we were rendering out huge scenes, but they all came out,” he says. “There was such a commitment to so many objects on screen, though, I don’t think I could have attempted that with anything other than C4D and still had it finished on time.”

Meant to look as if it has been around for thousands of years, this mysterious robot will play a fundamental role in upcoming Discordia adventures.

Throughout the process, Stark worked closely with Hahn and DeFilippo on concepts, each of them contributing ideas that went into the final look. Each scene was consistently dark with a genuine sense of decay and neglect seeping into every corner. True to King’s vision, there was always a touch of the bizarre, as well. In the kitchen, for example, Stark used C4D’s Hair module to give a life-like look to a giant “grandfather” flea sitting on the counter next to a can of chili peppers. To give the pots and pans a believable coating of kitchen gook he started by using CINEMA’s Danel shader for a shiny metal look followed by dozens of handmade shaders to add grime. “We weren’t going for photo realism here, but we didn’t want it to look too sterile and clean like a lot of things can in 3D.”

As they continue developing the game engine behind Discordia, Stark and his team are exploring concepts for future installments though no firm plans are as yet in the works. “One of the things we really want to do with Discordia is leave a jumping off point for people’s imaginations,” says Stark. “Even now I have such crazy ideas in my head about where the game is going.”