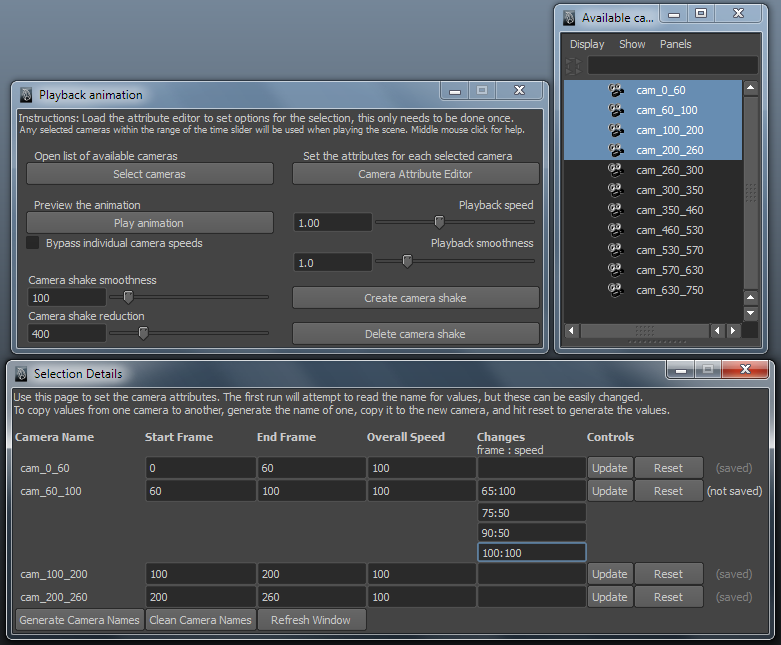 Temporary fix for Maya 2014, it's got a bit messy though so I basically need to start over with this.

My website here, not much on it but it's got a couple of other scripting things I did :) - peterhuntvfx.co.uk

Stuff which I will do soon:
Fix the camera list to work with camera groups (currently won't load at all, I added a temp fix for myself but I need to figure out what's wrong)
Fix cleaning names from giving error if a camera isn't already named
Clean the first part of the camera name too (eg. it'll rename camera1_0_100_50_f30s50 to cam_0_100)

I did this mainly because I found it annoying that I couldn't watch the whole animation without manually switching cameras. This will read the information from the camera name and then play the frames before switching to the next camera. It only works on the selected cameras and uses the time slider, so if nothing happens make sure something is selected, the frames are within the playback range, and you've set the attributes.

All you need to do is include the start and end frame in the camera, load the attribute editor to assign the values to the cameras, and you're good to go. It's also got a search option which will bring up a list of cameras for easy selection, and lets you add camera shake.

Due to the code now getting so messy and me running out of ideas, I probably won't update this anymore (unless someone was feeling awesome and gave me some money to rewrite it better aha), so feel free to do whatever you want with it :)


Known problems:
- Unselecting something while it's in the attribute editor will throw an error if you then try update it
- Setting the smoothness too high still slightly slows down the execution, not entirely sure why now

Possible improvements:
- Ability to have overall playback speed transitions (instead of only per-camera)
- Multiple start/end points for a single camera (eg. for an interview)
- Make it so the attribute editor doesn't have to run first to set the attributes
- Actually make a nice user interface

Show all 39 people who favorited this item