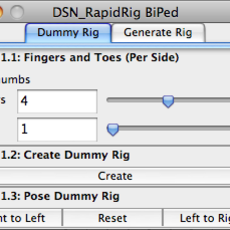 Tutorials > Character
Using "Rapid Rig: Advanced"
Dustin Nelson, updated 2010-07-27 04:11:16 UTC 66,049 views  Rating: (18 ratings)
77 Comments
Like
Page 1 of 1
The rapid rig is a tool designed to bridge the gap between character modeling and character animation. Using the user interface, the script enables the user to set up a bi-pedal character skeleton and rig in minutes, a process which can take up to several days.

The advanced version of the rig comes with enhanced features including customizable number of fingers and toes, stretchy and "toony" arms, legs, neck and spine, locking and following while using inverse kinematics for elbows and knees, orientation control for hips, shoulders, head and eyes, optional geometry created based on the user's rig set-up, as well as other animator-friendly controls.

2. An interface will come up called DSN_RapidRig BiPed. Start with the "Dummy Rig" tab

3. Step 1.1: Fingers and Toes (Per Side)
The radio button toggles on and off thumbs, and the the fingers and toes number is based on how many fingers per hand and how many toes per foot.

4.  Step 1.2: Create Dummy Rig Click the "Create" button to generate the dummy joints.
This will generate the dummy rig for you to pose the different dummy joints. Use these to line up the rig to your character
-First thing to do is scale the main control, located on bottom of the rig. Scale this up until it is as close to your character's size as possible
-Adjust the other controls to fit. Some allow you to translate, rotate, and or scale.
-If your character was not built facing in the +Z direction, you will have to re-orient your character in this fashion
-There are arrows on the elbows and knees. Elbows and knees are hinge joints (they only bend in one direction), so these arrows indicate the axis on which the joints will rotate (basically, this means where the elbow/knee will point when you bend the arm/leg)
-There are 3 locators on each foot. These need to be placed in accordance with the geometry.
-FootInTilt needs to be placed on the inside of the foot
-FootOutTilt needs to be placed on the outside of the foot
-FootHeelPivot needs to be placed at the far back of the heel.
-The rig does not allow you to rotate or move any center joints off the center axis, this includes spine, neck and head joints
-The rig does not allow you to "break" the arms or legs by positioning the elbows or knees in a position that is not humanly natural.

5. Step 1.3: Pose Dummy Rig
This step has three buttons to speed up your rig setup by allowing you to mirror one side to the other, so the best thing to do is set up one side, then mirror to the other. When mirroring, Left to Right means the character's left side to right side, eg. left arm and leg to right arm and leg.

7. Step 2.1: Optional Geometry for Animation
If you wish to have geometry created for your rig, enable the "Create Rapid Mesh" radio button. This geometry can be adjusted using the attributes of each piece of geometry, or by sculpting it. You may find this useful as either a proxy for your high-resolution character or as an actual character to animate with.

8. Step 2.2: Enable Toon Limbs
Enabling "Toon Arms" or "Toon Legs" is only recommended for cartoony characters, where you need to be able to have really rubbery arms/legs. If this is not a desired ability of your character, leave these turned off, otherwise you will end up with extra controls and extra joints which will make painting weights unnecessarily more time consuming.

9. Step 2.3: Create Character Rig
There are two options here, "Generate Rig" and "Delete Dummies".
-If you press "Generate Rig", a window will pop up recommending you save first. If you have already saved or do not wish to save, click  "Generate Rig" the dummy rig will be deleted, and the actual character joints and controls will be generated.
-If you press "Bo Back" the window will go away and you can now save your file. If you clicked "Delete Dummies" a different window will pop up verifying whether you want to "Delete Rig" or "Cancel". If you click "Delete Rig" the dummy rig will be deleted.

If you chose to generate the rig, you should get a message that says "CONGRATULATIONS! RIG COMPLETED!"

10. Step 2.4: Skin Geometry to Rig
If you click "Select Skinning Joints", the script will select all the joints in the rig you should bind your character to (there are extra joints like tip joints as well as joints used for some of the advanced systems. These should not influence your character).

To attach mesh(es) to the rig;
-click "Select Skinning Joints" to select all the joints to bind to
-add the mesh(es) to your selection
-go skin>bind skin>smooth bind
-make sure "Bind to:" is set to "Selected joints"
-adjust the other settings as necessary, then hit Bind Skin/Apply

11. The script automatically adds the joints and curves to their respective layers inside Maya


12. Rig Funcionality (this tutorial assumes basic understanding of 3d animation)
-on top of the standard controls, you can switch the arms and legs between fk and ik using the arrows near the wrists and ankles
-the arms and legs have squash and stretch in ik and fk.
-to use fk stretch on the arms, use ScaleX on the fkShoulder controls
-to use fk stretch on the legs, use ScaleY fkHip controls
-to use ik stretch on the arms, use Stretch on the ikWrist controls
-to use ik stretch on the legs, use Stretch on the ikFoot controls
-by default, the spine is fk only, this is typical for most basic, realistic rigs
-to turn on ik for the spine, select the main control, and turn on Spine IK
-3 ik controls will appear on the spine. These are essentially by the fk controls
-The ik  spine controls are affected by the fk controls, so they can be used in conjunction with fk
-the ik spine controls can be used on their own as well, to give more cartoony animation
-there is an extra attribute on the ik spine controls letting you know how long or short the spine is
-Spine Length default is 1, higher values means the spine is being stretched, lower values means it is squashed
-the foot controls have extra attributes you can use to move the foot from different pivots around the foot.
-there are two ways of controlling the eye joints. The eye joints should be used for attaching eyeballs to
-To change between the two methods, use the Aim Point attribute on the Head control
-Aim (default) allows you to move the aim controls and the eyes will look at the controls
-Point allows you to rotate the controls and the eyes will match the rotation
-the head, shoulders, and hips can either orient to the rest of the skeleton, or the main control
-use the respective Orient attributes to choose.
-A value of 1 follows the rest of the skeleton
-A value of 0 ignores the rest of the skeleton, and orients to the main control's position
-the IK wrist controls have dynamic parenting so you can have them move and orient with the hips, chest, and/or head.
-the IK elbow/knee controls have dynamic parenting so they can move along with the character more easily
-the elbow and knee joints can lock to the ik controls, making it easy to have the knees and/or elbows locked to a surface.

*Please provide feedback on any improvements, bugs, etc. you would like fixed or added.
Page 1 of 1