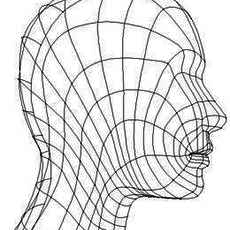 Tutorials > Modeling > Polygon
Modeling a POLYGON Head
sdb1987, added 2005-09-13 12:02:21 UTC 706,757 views  Rating: (10 ratings)
7 Comments
Like
Page 3 of 5
Make the head mesh visible in the front layer and hide all the polygons except for those around the eye socket. Make the eye socket polygon visible underneath the layer with the face (Figure 7-37). Use a 2D drilling operation to cut a hole out for the eye socket.

Figure 7-37 The outline of the eye socket is drilled onto the face mesh and then cut away.

After drilling the eye socket hole, weld any extra stray points around the hole opening. Paste the previously modeled eye lid object into the layer containing the head (Figure 7-38).

Figure 7-38 Once the eye socket hole is cut out, then paste the eyelid model into the face mesh layer.

Select the points around the perimeter of the eye lid object and the edge of the eye socket hole. Create connecting polygons between these two objects so that the eye lids are now part of the same mesh as the face (Figure 7-39). Connect or weld any extra points so that you only have three or four-sided polygons.

Figure 7-39 The upper eye lid folds under creating a line that should be modeled by splitting the polygons with extra points.

Figure 7-39 also shows how the eye lid folds under creating a thick line. It is very important to model this part of the eye lid since it gives a lot of character to the face. Insert extra points in an oval direction around the eye lid, select them in order, and then split the polygons. Once you have several extra half oval lines on the lid, then you can move them forward and back to form the eye lid fold. Approximately three or four sets of semi-oval lines make up this form.

The next step is to model the eyeball.

The eyeball can be a simple primitive ball or sphere. The labeled iris surface is inverted to form a concave shape on the white eyeball (Figure 7-40).

Figure 7-40 Making the iris concave adds to the illusion of the iris having depth.

The pupil is simply a hole in the middle of the iris. The pupil appears black because the inner surface of the white eyeball is colored black. You can select the back half of the eyeball and flip the polygons inward, name the surface and make it black. Model a transparent cover for the entire eyeball (Figure 7-41).