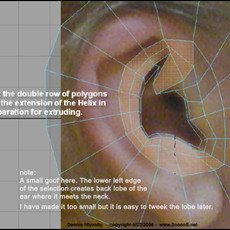 A tutorial by Dennis Hlynsky

Between June 22, and July 23,2006 I embarked on a study of ears.  This process involved building one or two ears each morning, recording the build process and criticizing the results for poly flow and ease of build.  This tutorial is based on Ear Number 30.  After a while later ear builds became streamlined and less about redirection edge loops.

The build can be modified to shape many different ear types. I have not tried animal ears but I see no reason why one could not shape the helix and add loops to create tall pointy ears. The ear can be easily sewn onto a head right behind the jawbone where the ears commonly grow.

The basic concept is to start with the nexus of skull, jaw, neck and ear hole as the topography out of which the ear is constructed.  Make the topography, the cup, the outer ear, and finally the ear canal.  Essentially build the ear from the inside out. Most of the tutorials I have seen start with the major shape of the ear and sub-divide to shape the detail.  I found it much easier to understand the ear shape as an organic growth which grows out of the ear hole of the skull. The ear then becomes a convoluted funnel and the building becomes easier. The mid point of the funnel is the intersection where the ear joins the head.

This is the starting shape.

Add four edge loops and remove the edges of the center polygon.

Adjust the vertices along to flow along the shape and extrude the center poly.

By picking the end points one can use average vertes to create a nice sweep where the Helix rises out of the Concha.