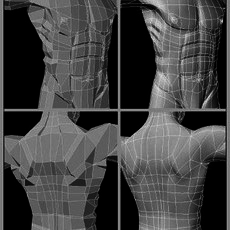 Subdivision modeling is a procedure for creating smooth mod- els while keeping the total polygon count at a low level. Point counts are small so that the sculpting process is less confusing. New software developments, such as those in Maya and XSI, offer more robust subdivision modeling tools, an improved interface, and the ability to render objects without converting them to high polygon models. This makes a compelling argument for implementing subdivision modeling.

This tutorial will take you through the process of creating a human model. The software that was used was Lightwave 3D but it should work with any program that has subdivision modeling.

4. Start shaping the head by moving points (Fig. 4). Work back and forth between subdivi- sion mode (Tab key) and the low poly model. The nose will be modeled later.

5. Delete half the head and use the knife tool to split the poly- gons near the edge of the cut end (Fig. 5). The points at the cut have to line up at a value of 0 on the x axis.

7. Select the points around the eye opening, copy them, deselect them, hide everything, paste the points and use the stretch tool to move them in. Show everything, select four points at a time and press p to make a polygon (Fig.7). Another approach is to copy the points into another layer, make the first layer visible underneath, move the points to the right position, and paste them back to the first layer and then select four at a time and make polygons out of them. Continue building extra polygons inside the eye opening. Use the knife tool and insert point tool to split larger polygons into smaller ones. Move the points to shape the eye area including the eyelids (Fig. 8 and 9). Figure 10 shows the eye area in subdivision mode. Make sure none of the polygons have more than 4 points around them. Get polygon statistics (w) to select and get rid of 1 and point polygons.

8. Use the knife tool to divide the polygons around the mouth area (Fig. 11). Delete the poly- gons to make an opening for the mouth (Fig 12). Select the points around the mouth open- ing, copy them, deselect them, hide everything, paste the points and use the stretch tool to move them in. Show everything, select four points at a time and press p to make a polygon (Fig.13). Continue building extra poly- gons to make the lips. The inside walls of the mouth in which the teeth and tongue will be placed can be made by selecting the points along the inside edge of the lips, making a polygon and extruding it back. The extruded polygons can then be divided and shaped to make the hollow of the mouth. Select the inside mouth polygons, name them, and flip the poly- gons inward (Fig. 14). Figure 15 shows the head in subdivision mode, so far. The nose will be modeled next.

9. Split the polygons under- neath the nose area and around the mouth. Select the polygon where the nose is located and bevel it out. Shape it somewhat like the one in Figure 16. Make sure the points of the nose in the middle of the head are at 0 x value.

10. Delete the polygon of the nose that is at the 0 x axis so that the face still looks hollow from the side view (Fig. 17).

11. Split the polygons on the side of the nose into smaller ones and begin shaping the wing of the nose by either beveling out a polygon in that location or pulling points out. Work back and forth between the rough polygon display and subdivision mode (Fig. 18).

12. Now it�s time to make the nostril. Split polygons on the bottom of the nose around the nostril opening. Select the poly- gons that will form the nostril hole and merge them into one. Select and bevel this polygon up into the nose (Fig 19).

13. Select only the polygons on the inside of the nose and split them near the opening with the knife tool. Select the newly cre- ated points and move them down toward the opening. Use the stretch tool to bring them closer together in the top view. Split any polygons that have more than 4 sides into ones with 3 or 4 sides. Work back and forth in subdivision and low polygon mode. Figures 20 and 21 show the nose with the open- ing. Figure 21 is in subdivision mode.

14. Before starting work on the ear, give the head a better shape. The polygons should follow the direction of the facial muscles. You can do this by splitting polygons and moving the new points both in subdivision and low polygon mode. Select the polygons at the bottom of the neck and delete them so the head is hollow when seen from the bottom and the side.

15. When shaping the head in subdivision mode, try pulling points in the perspective win- dow with Wireframe Shade on. Figures 22 and 23 show the head just before working on the ear.

16. Figure 24 shows the begin- ning of the ear. You simply add points on the polygon that forms the ear. Move the points to make a rough shape of the ear. Split the polygons outside of the ear so that each only has 3 or 4 points around it. The ear poly- gon will have more than 4 points.

17. Select the ear polygon and bevel it out like the one in Figure 25.

18. Split the polygons into 4 sided ones on the outer beveled part of the ear. Work in subdivision mode to give the ear a general shape (Fig. 26).

19. Split the extruded polygons located on the side of the ear and next to the head. Work back and forth between low polygon and subdivision mode to shape the ear somewhat like the one in Figure 27.

20. Refer to photos, anatomy illustrations or have someone pose for you while you shape the front of the ear. Start by splitting the polygons into smaller ones and then pull the extra points. Some points are tucked under others to model the various contortions of the ear�s cartilaginous structure. Figures 28, 29, and 30 show the front of the ear in its beginning stages.

21. After a while you will most likely have to push and pull points mostly in subdivision mode since the low polygon view will be too confusing to try to make sense of. The low polygon mode can still be useful for finding certain points. More polygons will probably have to be added for shaping the cartilage. Inserting extra points and splitting the polygons in key areas will add to the confusion but is a necessary part of finalizing the ear.

22. The final ear can be viewed in Figures 31 and 32 as low polygon and subdivision mode.

23. Select all the points in the middle of the face and use set value to move them all on the x axis to a value of 0. Mirror the half head at 0 value on the x axis. Figure 33 shows the final half head after subdividing it.