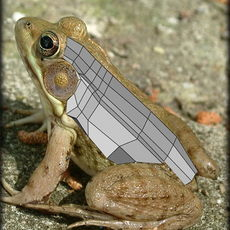 What I'm going to do, is trying to show you the main steps of how I've made my "Male Green Frog".

I've used Maya 8 for modelling, MentalRay for rendering and Photoshop for the textures.

The goal for me was creating a photorealistic render but also a 3d model for animation purpose, without the using of ZBrush (or similar software) and without adding any kind of postwork to the final render.

The fist thing I've done is doing some reserch for good reference having in mind the final result I wanted to achieve. The bad is that I didn't find all the views of the same frog so I did a sort of "mix" of different frogs for creating the main shape.

I've modelled the main body leaving holes where the legs are connected.
After that I've created the legs and I've combined them to the body

Once happy with the low poly model was the time to make the uv map (5).

For the main (half) body and the leg, I've made 2 cylidrical maps, for the paws I've used 2 planar maps: 1 from top view and one from bottom view. I've used a simple checker applied to a lambert shader for checking the overall process while tweaking the uvs.

After that I've duplicated the half frog and combined all ending up with 1960 polygon, quite good for the low poly model (that can be used as a cage for the rigging/animation process).

I've than duplicated the frog keeping the low model in another layer, and I've made the higher poly version (ending up with about 30000 poly) doing a polysmooth.