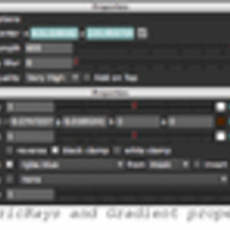 Sometimes a flare is not enough to simulate a big light or a sun.
The problem is that only one point detects the alpha, so you dont have a volume object that emits the light.
Ive had to create a sun for a project and I decided to do it in a way that you can control animation, shape and color. I also wanted it to hide or show behind alphas depending on its shape.
So with a little help of a Flare, a couple of VolumeRays and Radials I achieved a very good result for this job.
Here is the script and the explanation of how it works.
First, I load the sky and its alpha.

I create a Position node (named SunPos) that will control the position of all the moving stuff that create the sun.

Then a VolumeRays with this ex-pression on the Volumetric Centre fields:

Now the Position node controls the center of this effect.

I use one of the RGB channels as a mask for a Gradient node applied to the sky. In this Gradient node I can apply a color correction to the sky to generate volumetric rays caused by the sun/clouds interaction.

Now with a Radial node I draw a little ball.
Firstly I do a couple of steps to optimize the process:

1. with a Shuffle node from the sky image I turn all chanels to 0 and leave the alpha as it is.

2. a Crop node with these expressions to make the ROI smaller

This always makes a square around the ball that we draw in next step. (The Radial2.size variable is defined in step 3).