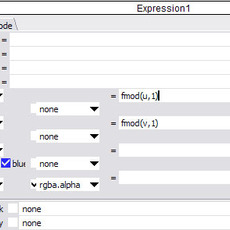 Tutorials > general workflow
texture warping
rueter, updated 2006-11-21 08:17:45 UTC 33,687 views  Rating: (0 ratings)
0 Comments
Like
Page 1 of 4
The STMap is a pretty simple but powerful node.
For each pixel in the output image it looks at the corresponding pixel of the stmap and uses it's red and green values as x/y coordinates respectively to pull the right pixel from the source image.
Given that your 3D renderer can output texture UVs this can be used to modify or replace textures on a 3D rendered image.

First, pull in the texture you want to apply and the UV render. I've also got an rgba render of the fancy shmancy tea pot I want to mess with so I can see if my texture ends up in the same position. Besides, I can pinch the alpha channel from it which will come in handy.

The UV image should be in linear colour space so make sure to use the correct setting in the Read node's ColorSpace tab otherwise your texture will end up all distorted.
Now simply add a STMap node and hook up the texture to it's "src" pipe and the UVs to it's "stmap" pipe. You will have to tell Nuke which channels to use for the UVs so in my case I need to set the "UV channel" knob to "rgb" since that is the layer where my UVs live.