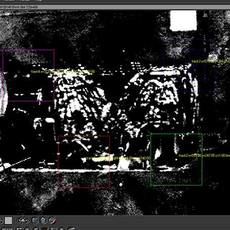 While you won't be throwing out Photoshop any time soon, Shake's QuickPaint node does provide the ability to do a lot of those quick touch-up fixes that seem to be a part of just about every shot.

The QuickPaint node has only the most fundamental tools, but thanks to Shake's flexibility you can get quite a lot out of it. One of the primary shortcomings of QuickPaint is that the Reveal mode offers no control over the position and time offset of the input clip used as a source. You won't be able to change that for each stroke within a frame -- that's a shortcoming we'll need to wait for the Shake developers to address -- but with judicious use of expressions and in combination with other Shake nodes, it's possible to set up a paint-through source that can easily be repositioned and time-shifted for each frame requiring touch up.

In the shot that I'll be working through here, from a short Star Wars fan-film about the invention of the first light saber, a sputtering beam element is to be added to the practical light saber handle in the actor's hands. Unfortunately, during the shoot no one realized that the wire sticking out of the handle would be a problem -- it's going to be covered by the light saber beam, right? Well, not always. When it's sputtering on everything's great. But when it sputters off we've got a problem.

A typical in-the-comp approach to this situation is to create a clean plate, track it into place, add grain as needed, and then use a RotoShape to replace the problem area in the original footage. Unfortunately, this shot has the added complication of a moving camera creating a change in perspective over the duration of the shot.

Even after matchmoving the clean plate into position, that perspective change means that it still won't look quite right in much of the shot. What's really needed is a clean plate that corresponds to each of the original frames. In light of that, I'll try a different approach, matchmoving a frame near the current one into place for use as a paint source. I won't have a complete clean frame, but with all the movement in the shot I can slip the footage a few frames so that I get enough clean background at any particular time to paint out the wire and the perspective will be nearly the same. A nice consequence of this approach is that as long as the source frame is kept changing I get the grain for free. The trick is in setting up so that whichever frame I want to use at any given time is matchmoved to the correct position.