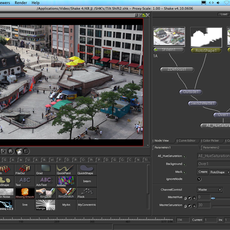 Tilt–shift photography is the use of camera movements on small- and medium-format cameras, and sometimes specifically refers to the use of tilt for selective focus, often for simulating a miniature scene. Sometimes the term is used when the shallow depth of field is simulated with digital post-processing; the name may derive from the tilt–shift lens normally required when the effect is produced optically.

"Tilt–shift" encompasses two different types of movements: rotation of the lens plane relative to the image plane, called tilt, and movement of the lens parallel to the image plane, called shift. Tilt is used to control the orientation of the plane of focus (PoF), and hence the part of an image that appears sharp; it makes use of the Scheimpflug principle. Shift is used to adjust the position of the subject in the image area without moving the camera back; this is often helpful in avoiding the convergence of parallel lines, as when photographing tall buildings.

Smallgantics is a digital image process that accurately simulates miniature depth of field (DOF) on full-scale filmed subjects via a "hand-made" digital application. Artificial depth planes, up to 8 layers, are generated by the artist, which distort with each frame of a sequence, giving the artist complete control of a simulated miniature DOF scenario.

Again, something photoshop has many tuts for but none for Shake.

The photo is from a video clip found online.

T1.png is a screen shot of the node tree.
1. Import photo
2. Add RotoShape
3. Do Not connect photo or RotoShape until RotoShaping is complete

T2.png is a screen shot of the RotoShaped area.
1. After the initial Roto is completed (group) use (edge) to "feather"
2. That is the "inside" RotoShape that you see
3. Copy the photo and RotoShape
4. Add the other nodes and connect the tree
5. Adjust "ZDefocus" and "HueSaturation" until desired look

T3.png is a screen shot showing the 'feathered" RotoShape1 area

T4.png is a screen shot showing the "feathered" RotoShape3 area (The opposite of RotoShape1 based on the invert node)

T5.png is a screen shot showing the "feathered" effect of the RotoShapes. Click the left side of the "Over" node to view this
1. The ZDefocus" node numbers were adjusted

T6.png is a screen shot showing the completed "Tilt Shift"
1. The "HueSaturation" node numbers were adjusted
Page 1 of 1