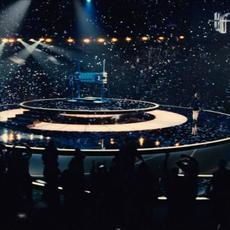 “We had been experimenting with iPi Motion Capture and knew going into the project that we would use it for some of the crowd duplication and we definitely put the software through its paces,” Jordan Soles, Rodeo FX’s Chief Technology Officer, says.

Specialized Workflow:
Those paces included a specialized workflow perfectly tailored to the needs of the scene. Soles explained that they began the process by using the iPi Motion Capture’s two Kinect camera set up to body scan their 100 or so employees, while simultaneously taking high res still images of their faces. After cleaning up the mesh, they composited the still photos onto the model to create a default rig.

From there they brought the employees back in, and filmed them using the higher resolution 6 Sony Eye camera set-up, this time acting like they were in the crowd at a big arena event – clapping, standing, talking, cheering, etc. That data was then cleaned up using Autodesk’s MotionBuilder, with final animation and lighting completed with Autodesk’s Softimage.

“The process worked particularly well because the scene was extremely well lit and because the camera is constantly moving quickly,” Soles adds. “However, this was a big challenge because of the length of the shot, which is over a minute long, featuring literally thousands of people we had to duplicate.”

Fundamental Changes:
For Jocelyn Hudon, Rodeo’s Head of Animation, iPi Motion Capture’s simple set-up and quality of mocap data was a key factor in the success of the scene.

“It’s very easy to set up – in a few hours we can be ready to capture animation data – and because you don’t need sensor suits or exhaustive clothing setups, we could capture data from different actors at any time,” Hudson says. “It gave us a great 3D animation base for our animators to work from, as well as a 3D reference for keyframing and motion data editing.”

And beyond the immediate success of “Now You See Me,” iPi Motion Capture has actually fundamentally changed the way Rodeo FX bids on crowd simulation projects going forward – giving them added confidence to go after complex assignments.

“We’re bidding work now that is centered on this kind of high-level crowd duplication effects,” Soles notes, “and we’re going after it with a high level of confidence that we can build out realistic crowd simulations with iPi Motion Capture and the approach we created for ‘Now You See Me.’ It’s an extremely good piece of software, and when I look at its trajectory it is only is getting better. We feel really good about using it.”

About RODEO FX:
Since its inception in 2006, Rodeo FX has provided unique visual effects to well over 100 motion pictures, and to numerous, high profile advertising campaigns. In addition to its contributions to "Now You See Me," Rodeo FX has also recently provided VFX to such high profile projects as "Jack The Giant Slayer," "The Twilight Saga: Breaking Dawn, Part 2," "Red Tails," "Immortals," "Abraham Lincoln – Vampire Killer," "Source Code," "Resident Evil: Afterlife," "Terminator Salvation," "Indiana Jones and the Kingdom of the Crystal Skull," "Smurfs 2," "The Three Musketeers," "Golden Compass," and many more. Rodeo FX is located at 90 Queen Street, 2nd Floor, Montréal, and QC, CANADA. The phone is 514/397-9999. For more information, please see: www.rodeofx.com.

About “Now You See Me”:
“Now You See Me” pits an elite FBI squad in a game of cat and mouse against "The Four Horsemen," a super-team of the world's greatest illusionists. "The Four Horsemen" pull off a series of daring heists against corrupt business leaders during their performances, showering the stolen profits on their audiences while staying one step ahead of the law. Directed by Louis Leterrier, the film features an ensemble cast including Jesse Eisenberg, Mark Ruffalo, Woody Harrelson, Mélanie Laurent, Isla Fisher, Dave Franco, Michael Caine and Morgan Freeman.

All trademarks contained herein are the property of their respective owners.

Click here for more info about Rodeo FX’s work on “Now You See Me”:
http://www.rodeofx.com/all-films/now-you-see-me