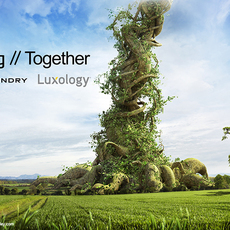 London, 25th September 2012 – Leading visual effects software developer, The Foundry, today announced its merger with Luxology. The two companies are a great fit in terms of technology and markets. The combined portfolio will open doors to new ways of working, providing artists and designers with increased creative choice.

The Foundry with its stable of award-winning 2D and 3D VFX software, including industry standard compositor NUKE, sees Luxology’s complementary technology as a natural addition.

Luxology’s innovative 3D modelling and rendering technology and its flagship product, modo, are world class and favoured by thousands of artists and designers globally.

The collective product range is very exciting, but equally important is the shared ethos of the two companies and the staff within them. Both The Foundry and Luxology have strong reputations for being community driven and good collaborators. They are widely recognised for building tools around customer needs, providing artist-friendly workflows and great support.

This union will allow us to push the boundaries for our customers across a wide range of industries.

Bill Collis, CEO of The Foundry comments:
“We were impressed by modo's strong roots in a variety of markets - including VFX, design and games - and by Luxology’s focus on creating artist friendly, highly advanced technologies. Both comapnies are a great match for each other. The Foundry and Luxology's products are highly complementary, and we both like our products to be open and flexible, letting the customers choose how they want to work. In the short term we will be continuing to develop the interaction between our products, which will be of immediate benefit to all of our customers. We can’t wait to see what our combined experience and knowledge will allow us to build in the long term.”

Brad Peebler, President of Luxology comments:
“The Foundry has an impressive pedigree in the visual effects industry, where its products and attention to customers are second to none. Creative industries are converging in terms of media, quality and deliverables. Joining forces with The Foundry will allow us to accelerate the development of modo, ushering in a new era for our customers. We simply can not wait to leverage our combined strength to change the landscape for content creators everywhere.”

A year ago, at a chance meeting organised by ILM, John Knoll threw down the challenge of integrating products from both companies. This initially sparked the idea that the two companies could be a greater force together than apart and the merger idea snowballed from there.

John Knoll, Visual Effects Supervisor at Industrial Light & Magic comments:
“I am a big fan of both Luxology and The Foundry having been using modo for quite a while and KATANA here at ILM in the last 18 months. Their marriage is really exciting for the VFX community. Their combined technology and similar approach to working with customers is a very interesting development. I’ll definitely be keeping my eyes on them.”

The Foundry is a world-leading innovator in visual effects technologies and is internationally renowned for its product design and collaborative approach. Founded in 1996, the company has established itself as a critical partner to major feature film studios and post production houses worldwide including The Mill, ILM, The Moving Picture Company, Walt Disney Animation, Weta Digital, Framestore, Sony Pictures Imageworks and Digital Domain.

The Academy of Motion Picture Arts and Sciences awarded a Sci-Tech Award® to The Foundry’s development team for the FURNACE image processing suite in 2007 – and the company now holds two products with AMPAS Sci-Tech Award® winning technology including high-end compositing system NUKE.

In 2011 The Foundry ranked 54th in The Sunday Times Tech Track (up three places from 2010), and debuted in both the Sunday Times International Track and the Deloitte Technology Fast 50 lists.

Backed by The Carlyle Group with a substantial portion still owned by the staff, The Foundry is run by its original management team.

Based in Mountain View, Calif., Luxology® LLC is an technology company developing next-generation 3D content creation software that enhances productivity via artist-friendly tools powered by a modern underlying architecture called Nexus®. Founded in 2001, by Allen Hastings, Stuart Ferguson and Brad Peebler, Luxology is home to some of the top 3D engineering expertise in the computer graphics industry.

Luxology’s modo is at the centre of an active global user community producing models, images and animations of the highest quality. Luxology’s rendering technology is under licence to Dassault Systèmes SolidWorks Corporation and Bentley Systems, Incorporated.

More information on the company, its licensable Nexus technology, its flagship product modo® and a gallery of images from the Luxology community is available online at www.luxology.com.